ST. THOMAS BY THE SEA 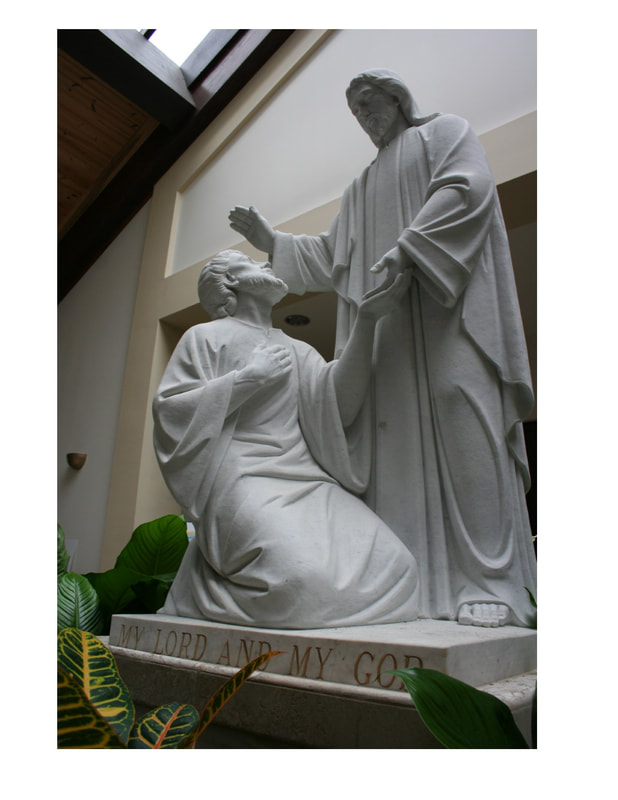 St. Thomas by the Sea Parish grew out of a mission, Good Shepherd Chapel, established in June, 1986 by the late Rev. Anthony Zoghby, Pastor of Our Lady of the Gulf Parish of Gulf Shores. Recognizing the spiritual needs of Orange Beach Catholics, as well as those of the ever-growing number of Catholic visitors to the area, Archbishop Oscar Lipscomb authorized the rental of space in the Gulfview Shopping Center for the Chapel.

It soon became evident that both permanent residents (approximately 75 families at the time) and the many visitors to the area would require a permanent house of worship. Officially established as St. Thomas by the Sea Parish on May 9, 1991, the new faith community came under the guidance of Father Francis V. Cusack as Pastor.

The church property consists of four and one-half acres of land, most of which was donated to the parish. The Parish Center building (which now houses Cusack Hall, offices and classrooms) was dedicated and blessed by Archbishop Oscar Lipscomb on October 1, 1994. An organ and marble altar were donated by Our Lady of the Gulf parish, and pews were the gift of St. Lawrence parish in Fairhope.

A pastor's residence was completed in September, 1998. Construction on the church started in the summer of 1999 and the Solemn Dedication took place on December 17, 2000. The church seats about 800 people in the nave, and includes a chapel with seating for 100 people, two sacristies, a cry room, ushers' room, and reconciliation room. An enclosed narthex joins the new building to Cusack Hall, with a statue of St. Thomas and Christ as the focal point.

Several dedicated Pastors have served the Parish over the years:
There are presently about 300 families registered as parishioners, and many visitors. 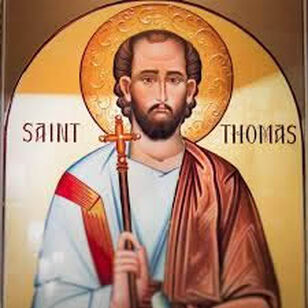 St. Thomas was a first century disciple and apostle of Jesus Christ. He took the Gospel message to the known ends of the earth.  Thomas was likely born to a Jewish family in Galilee. Nothing is recorded of his early life or of how he came to be a disciple.  His name is included in all listings of the twelve men who accompanied Jesus during His three years of public life. After hearing that Jesus intended to go to Judea, where He was certain to be arrested, Thomas boldly proclaimed his willingness to go forward and “die with Him”.  He is mentioned as being present when Jesus raised Lazarus from the dead.  During the conversation at the Last Supper, it was Thomas who stated, “Lord we do not know where You are going. How can we know the way?”, prompting Jesus to clearly declare that He Himself is the way, as well as His oneness with The Father.  Most memorably, it was Thomas who, having been absent at Jesus’s first post-resurrection appearance to the Apostles, did not believe the resurrection story. Insisting that he would need to not only see the visible crucifixion wounds, but probe them, he has gained a reputation as “Doubting Thomas”.  It is often forgotten that after Jesus appeared a second time, asking him to touch the sacred wounds, Thomas openly declared, “My Lord and my God!”, an explicit confession of Jesus’s divinity.  Rather than assuming that Thomas disbelieved that Jesus was risen from the dead, it might be more fair to consider that Thomas could not comprehend a risen human body, rather than an apparition.  The final mention of Thomas by name in Scripture is his presence at the Sea of Galilee fishing expedition which was summoned to the seashore by Jesus.

Of all the Apostles, we have the most post-Biblical information about Thomas.  According to Eusebius, the most well-known and reliable historian of ancient Christianity, Thomas left Palestine after Pentecost and went to Osroene.  This land was located in what is now southern Turkey and northern Syria, and many Jews lived there, speaking Syriac, a language similar to Aramaic.  He is also recorded as evangelizing outside the boundaries of the Roman Empire in Armenia and in Parthia, which is now northern Iran.  It is believed that he returned to Jerusalem for the circa 50 A.D. Council of Jerusalem, which was called in order to resolve the important matter of Mosaic Law for Gentile converts to Christianity.

There is substantial evidence that Thomas spent his later years far to the east of the Roman Empire.  There was a document written circa 200 A.D., known as The Acts of Thomas.  It was considered historical fiction, but based on enough historical truth that it was taken seriously.  This book states that Thomas went to what is now southern India and evangelized extensively there.  It also states that he was martyred there, and his body buried at the city of Chennai, formerly known as Madras, on the southeastern coast of India.

When traders and missionaries from Portugal arrived in southeastern India in the sixteenth century, they were stunned to find a well-established Catholic community there.  These Christians traced their religious heritage back to Thomas.  The Portuguese, under orders from their king, did extensive research and many interviews, discovering an impressive amount of oral tradition and some ancient books, written in the Syriac language.  When the Bishop of Malabar was questioned, he told of Thomas going as far as the Iranian Empire with [Sts.] Jude Thaddeus and Bartholomew, and going further alone to the west coast of India, then to China, and lastly to the east coast of India.  Archaeological research in the area has uncovered artifacts indicating the presence of Christianity going back to at least the third century.  The Rabban Song, which has been handed down for centuries by Indian Christians, recounts Thomas’s deeds and travels in India.  He is said to have baptized many thousands of Hindus, been the means of hundreds of miracles, and ordained numerous priests and bishops.  According to Indian traditional belief, Thomas was martyred by being speared in the year 72 by Hindu priests who resented the number of people who were converting.  No other place claims the death of Thomas, so there is no dispute.  In the fourth century, some of his skeletal remains were taken to Edessa, the capital of the Osroene kingdom and a significant city in the early centuries of Christianity.  The Portuguese took more of the relics to Ortona, a coastal town in Italy.

The life of St. Thomas after Pentecost is typical of all the Apostles, who changed from confused and frightened men into emboldened evangelists who lived out their lives proclaiming the Gospel they had seen with their own eyes, even unto death.  Patronages of St. Thomas are numerous, and he was declared the Apostle of India by Pope Paul VI in 1972.  Most of his remains are lovingly venerated by Indian pilgrims in the beautiful St. Thomas Cathedral Basilica in Chennai.  His feast day is a universal feast of the Church on July 3.
Powered by